It was opening night at Bax Food Co., the newest venture from Bossman Foods. Roderick is pretty well known by the small West Indian community in Melbourne for his Caribbean food wholesale business and his event catering, so a new Caribbean restaurant with his name behind it is of great interest.

We reserve a table for the second of two sittings on opening night. The old Gravy Train venue on Gamon Street is barely recognisable, with a light new paint job, vibrant art on the walls and chairs and stools painted black, yellow and red.

The place is buzzing, with most of the indoor and outdoor seating already taken. We recognise a few familiar faces in the crowd, so there will be a few discerning palates to check out the promise of “contemporary Jamaican” fare.

The maître d’ and the floor staff are unfailingly polite, professional and at hand. I didn’t once hear the grating over-familiarity of a “guys”, “mate”, or (the dreaded) “man”.

The seating is mostly at large share tables, narrow counter tops along the wall or tall bar-type tables with high stools. Not my favourite type of seating arrangement, and perhaps more appropriate for daytime use than a relaxed evening dinner. Even the smaller high tables seemed to have strangers sharing the space.

We were seated towards the back of the restaurant at a large table, sharing with a family party of six or seven. Bax still doesn’t have their liquor licence so we chose a fruit punch and a watermelon juice.

The food menus comes in four parts: small irie grub, larger boss grub, side grub and sweety grub. We chose some ackee and saltfish patties to start, with a curry goat and jerk platter to follow and a side of rice and peas.

The atmosphere while we waited was energetic and friendly, although the shared seating made for a pretty noisy environment if you wanted a chat. The music was laid back Jamaican, and the mocktails flowed. We genuinely had not noticed the time passing when the maître d’ came to us and apologised for the wait, promised our food would be along shortly and delivered two more drinks on the house. A nice touch.

Minutes later the food arrived, served in recycled paper receptacles including a box or “bax” after which the eatery is named.

The patties were small but delicious – two to a serving. The ackee and saltfish filling was complemented by a touch of tangy tomato and love apple sauce. I’d definitely come back here for two of those as a light lunch.

The goat curry was generous: meat on the bone, meltingly well-cooked, beautifully seasoned.

My dining companion’s jerk platter initially came out incomplete, but this was rectified in moments with another apology. Just a minor slip on an opening night. The platter included a piece of delicious roast jerk corn sprinkled with grated coconut, a chicken wing, a piece of chicken and a chunk of pork, all nicely seasoned with (do my tastebuds deceive me?) the unmistakable notes of Walkerswood jerk seasoning, the best there is. Bossman Foods is a major wholesaler of this stuff, so I suppose the restaurant is a good showpiece, and there were plenty of foodstuffs for sale near the counter. All of the jerk stuff was properly cooked on a charcoal barbecue, so you got that lovely charred taste and texture.

My curry goat came with a side dish of roti bread, which tasted more like a corn bread seasoned with cumin and other things, quite delicious and great for soaking up the sauce.

The rice and peas was a generous helping but with kidney beans rather than gunga or pigeon peas, but that’s not unusual in Jamaican fare. 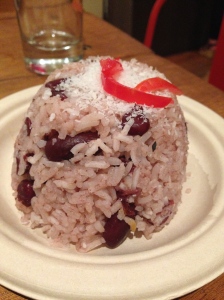 Without exception, the food was very well seasoned, well presented, expertly cooked and in generous portions. I understand serving some of the main dishes in a “bax”, but I felt they pushed the concept a little too far with the paper and cardboard plates and bowls for the other dishes. Too “canteeny” for the price. And the side plates (real crockery) we had to eat from could have been larger: I struggled to get a good mix of curry, meat, rice and other accompaniments on such a tiny plate.

As we continued eating, the family beside us left and was replaced by an energetic bunch of young women on a night out. Their conversations were so loud we literally had to stop talking to each other. Again, not such a fan of shared tables for this reason. The seats themselves are colourful, but I can’t help thinking they were chosen to allow you to relax for just long enough to eat and go, and not linger for another drink or two.

If anything made me hesitant about coming back here, it would be that. The eatery is welcoming and vibrant not to mention its excellent food, but there’s nothing about the design – indoors anyway – that makes you want to sit back, relax and order another drink.

It’ll become a regular haunt for us nonetheless, and I wish them all the best. It’s great to have such genuine West Indian food right on our doorstep.

Bax have now changed some of their serving formats to include the jerk platter presented on a banana leaf and wooden platter, all of which complements the food far better in my opinion.