My second day on the Wild Atlantic Way starts early with an early morning walk. I ramble through the deserted streets of Clifden, past the Alcock and Brown Hotel, and take a left at the fork in the road. Past the old handball alley and the new children’s playground, fishing boats are moored alongside newly painted white bollards, and the Quay House B&B is a riotous colour of summer flowers and hanging baskets. 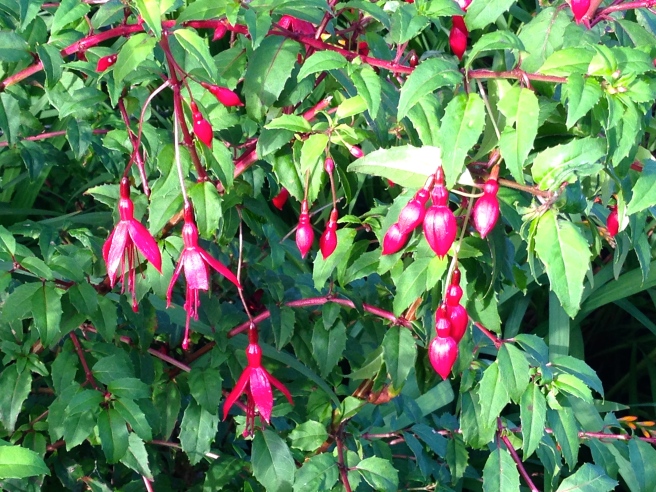 The narrow bay is millpond-still. I feel as if I have the whole of Connnemara to myself.

Later, after breakfast, we head north on the Wild Atlantic Way towards Leenane. The view alternates from rural hedgerows and pretty roadside gardens, to huge vistas taking in the beauty of the Twelve Pins and countless bog lakes and ocean inlets.

Past Letterfrack Quay we turn inland again, around Diamond Hill in Connemara National Park and on past the serene lakeside site of Kylemore Abbey. Kylemore Lough itself is deserted and still, framed by Mweelin Mountain.

As we approach Leenane, the view to the west opens dramatically to show the ten mile long Killary Harbour, Ireland’s only fjord. Connacht’s highest peak, Mweelrea, dominates the northern shore.

The fjord itself is cross-hatched with miles of mussel rafts.
We stop for a pot of tea and some apple tart in Leenane before heading back south, towards Clifden.
We take a detour at Moyard and loop round to the tiny port of Cleggan where the Inishbofin ferry leaves. A random road sign simply saying “Strand” takes us down a winding boreen to a beautiful, deserted beach. I take out Mum’s folding chair and she sits in the quiet while I venture down to the water’s edge.

Everything is pure white and lapis lazuli blue. The view out to the Atlantic is broken by a few tiny islands, and if I’m not mistaken I can see the stark cliffs of Achill’s west coast far in the distance. “What’s the name of this beach?”, asks Mum. I haven’t a clue, and later on the Ordnance Survey map I still can’t make out exactly where we’ve landed. 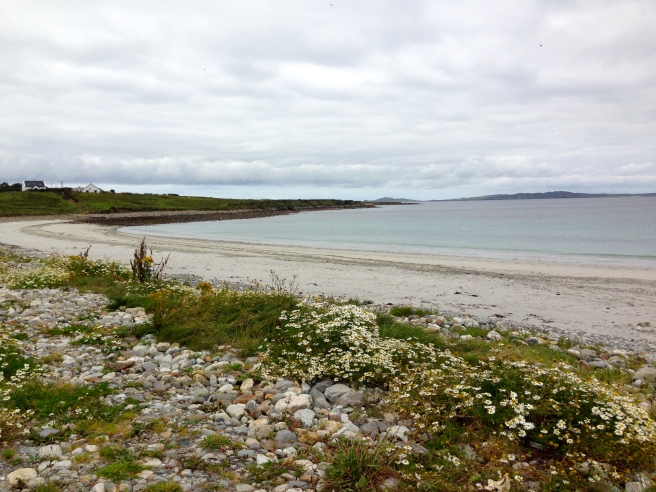 Omey Island is a small tidal island not too far from Claddaghduff. The tide is out as we approach, and we can see horse riders being led back across the sandy causeway that links the island to the mainland at low tide. We’ve been here before and missed the chance to drive across; this time we are more fortunate.

I drive our modestly-sized Renault onto the strand, more confident having just witnessed somebody in a tiny Nissan Micra do the same. Blue traffic arrows guide walkers, riders and motorists across the few hundred yards of flat sand to the entrance to the island. A single boreen leads to the western edge of the island.
We pass a handful of other motorists and walkers as we wind our way through empty fields, dry stone walls and the odd B&B signpost. The road stops abruptly at Gooreenatinny. The tiny bay points due west towards the wide expanse of the Atlantic: next stop Boston. 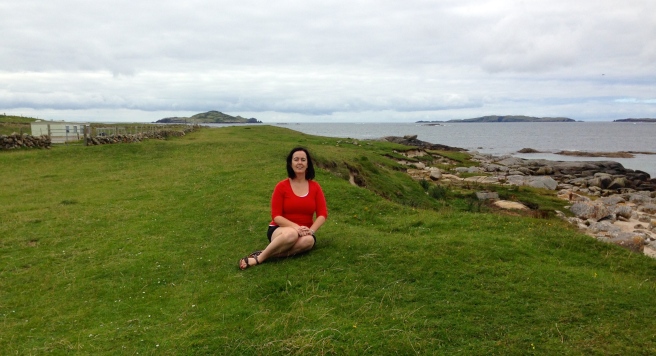 Less than twenty minutes later we decide it’s prudent to turn back, having not checked the tide times before daring our little excursion. Sure enough, the water is inching in towards us as we cross the strand again; do I imagine it’s moving pretty quickly by now? Indeed not: we reach the little car park in the mainland side by exactly four o’clock, and by three minutes past a fast-moving finger of tidal water has already reached the traffic arrows. We watch as the tide spills in alarmingly quickly, and wonder how the motorists we saw crossing as we returned are going to escape.
Ballyconneelly Strand is one of a handful of unusual beaches on the west of Ireland where the “sand” is actually crushed coral and seashells. We often stopped here during childhood trips to the west. 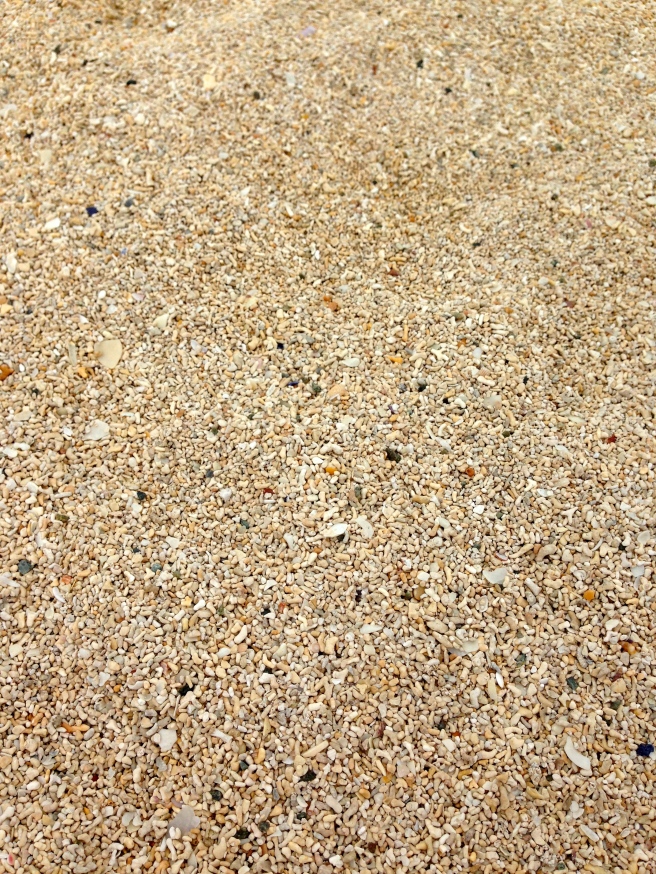 I help my mum down to the water’s edge where even on a cloudy summer’s day the sand is brilliant white against the turquoise of the calm Atlantic inlet. The crushed coral hurts our sandalled feet but we don’t care. This is one of our favourite little strands on the west coast.

The back to back beaches of Dog Bay and Gurteen Strand don’t tempt us today, as we are on the hunt for a pot of tea. Down into Roundstone, we park the car by the little quay and find a little cafe that serves yet another delicious pot of good Irish tea (is it the Connemara bog-filtered water that makes the tea so wonderful?) and a lump of apple tart. This strange, still weather makes everything on the landscape seem even closer and the muted greys and blues even more striking. 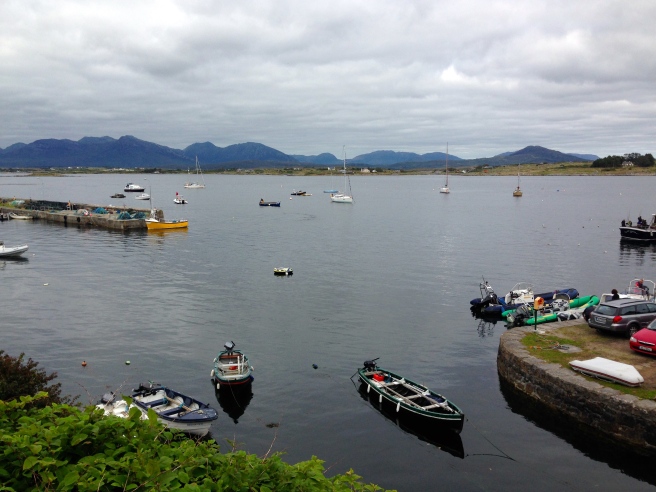 We take the scenic route back to Clifden. Continuing north-east out of around stone we pick up the bog road that cuts westwards through the Roundstone bog conservation area. This must be one of the most spectacular drives in Ireland, and even though we’ve done it dozens of times we still stop the car every few hundred yards to take in the magnificent scenery. We see two cyclists doing the same, and I genuinely wonder what it must be like to try and take in this breathtaking beauty for the first time, perhaps knowing you may never see it again. 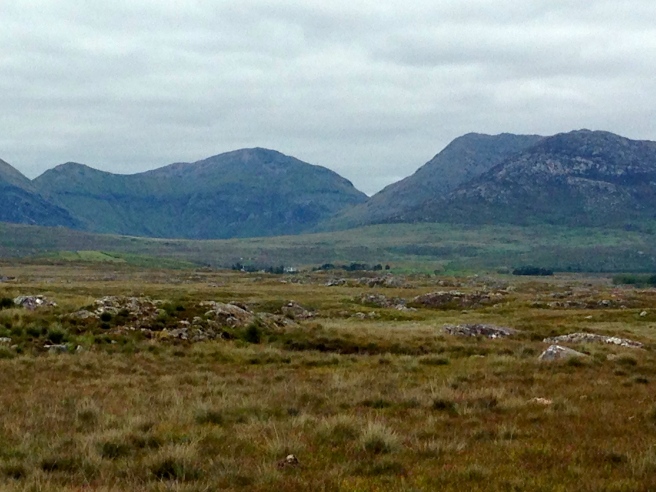 Far in the distance we can see the antenna of  Marconi’s first transatlantic telegraph station. Apart from the car and the bitumen of the road we travel, this historical structure is literally the only man made thing we can see, although we know the bog’s history includes not only the beginnings of the telecommunications age but also the age of transatlantic flight: it was into this very bog almost one hundred years ago that Alcock and Brown crash-landed their Vickers plane after successfully crossing the Atlantic from Newfoundland.
Back at base in Clifden, we feast again on the finest of fresh Irish produce before turning in. We’re not finished yet with the Wild Atlantic Way. 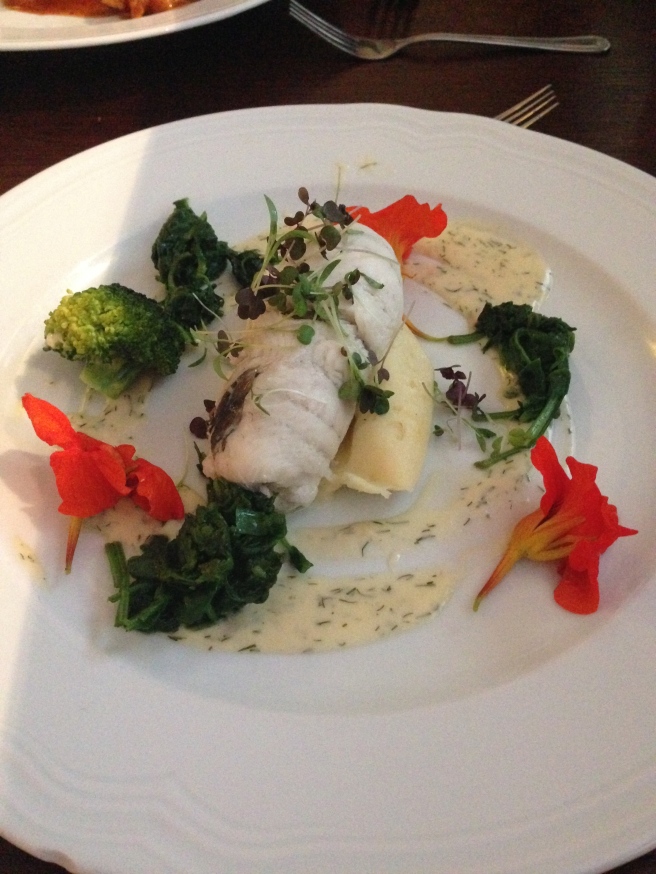