A chilly Thursday night saw us sampling jazz night at the Commune, a little cafe bar near the Peter Mac and St. Patrick’s Cathedral in East Melbourne. At just past six in the evening the place was almost full of diners ready to celebrate the Commune’s ninth birthday. Perhaps it’s the timing of the jazz night – doors open at six and it’s all over by nine – but the average age of the clientele was what my mother would call “active age” – sixty and (well) over. Apart from our table, of course, who were positively glowing in youthful middle age. 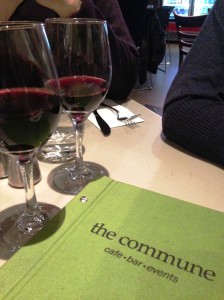 The music started almost immediately: the John Montesante Quintet are the resident Thursday night band, giving the old standards plenty of welly. I do like a good trumpet, and John Montesante was pretty decent. 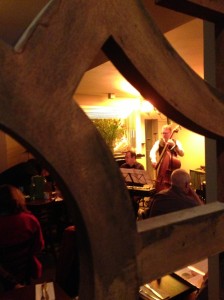 The guest singer for the evening was one Jeff Duff, known to older Australians as the lead singer from the group Kush, now channeling his inner David Bowie after a successful five-night sellout gig in the Sydney Opera House Studio. A “skinny white guy” with a big soulful voice, Duff was striking in a vintage yellow-checked suit straight out of Carnaby Street, and I could see why he was favourite to play the Thin White Duke. 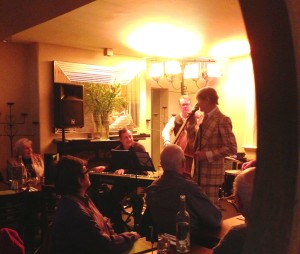 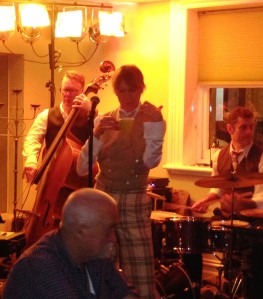 Foodwise, however, the Commune didn’t shine. The food was perfectly acceptable really, a bit pub-grubbish but nothing impressive. Orlando’s calamari salad and Chris’s chicken parmigiana were OK, but nothing special. Robyn’s steak looked pretty good I suppose, and my lasagne (although not piping hot) was a great choice for soaking up the Langhorne Creek Leading Horse Cabernet Sauvignon we were quaffing.

I guess you don’t really come to the Commune for a gourmet dining experience.

The music was old-school but fab, as was the entertainment of watching our fellow diners at the next table trying to clap along in time to the music (it’s harder than you think, apparently).  During one of the breaks, Montesante himself spied Orlando, and (quite rightly) decided he had to come over and explain to the only black man in the room why he was all dressed up in the uniform of a US Civil War Confederate officer. He enveloped the sitting OG in a bear-hug from above, topping off his greeting with – wait for it – a kiss on the forehead and “It’s a real honour to meet you!”. Maybe he thought Orlando was famous? Many Australians do.

Montesanto then went on to provide the politely-smiling Orlando with a history lesson on why it was ok that he was wearing a Confederate officer’s uniform, because slaves actually fought for the Conferedate side don’t you know, didn’t you see the film Glory, etc. Yes, Orlando replied, I am familiar with the history of the era. Ooh, says Montesante, in a surprised voice, you’re intelligent! Not patronising at all. Come another night, he said, and I’ll be wearing the full Yankee regalia.

He then completed his credentials by explaining that he regularly plays with African-American musicians, including his really good friend (whose name he could not quite remember) who hails from Ohio, Illinois. Must look that up. He then took his leave, calling Orlando his brother from another mother.

Oh, he was a perfectly lovely man, well-meaning and maybe a little drunk. Who knows. He visited Orlando twice more in the evening, inadvertently adding to the entertainment of the night.

As far as food goes, jazz night at the Commune is nothing to write home about. Music-wise it’s a blast, and you are home in your PJs before ten on a school-night. What’s not to like? We’ll probably go again for the laugh.