Global cities are well defined in economic terms. They dominate the trade and commerce of their home countries and beyond; they have global decision-making capabilities, and they are centres of distinction and innovation in education, entertainment and technology.

Global cities to me always had a more visceral definition: larger than life, they know they are different, more important, create a larger vortex. And crucially, they don’t care. They are too busy being a global city to think about it too much, and they certainly don’t care what you think. A visitor to a global city is not required or expected to fall in love with the place, to applaud its many merits and achievements. Citizens of global cities really just want visitors to walk at a decent pace, learn quickly what side of the escalator to stand on, spend their money and generally not get in the way.

As a result, of course, we all adore these places. Never mind that New Yorkers are brash and direct, that the rents are as sky-high as the buildings. Those most critical of US foreign policy or cultural domination will sigh at the mention of New York and declare it their favourite city on earth. Never mind that London is congested and chilly, or that the tube has no air-conditioning, or that Heathrow is a nightmare. Everybody wants to go and live in London in their gap year. It’s the buzz, you see. 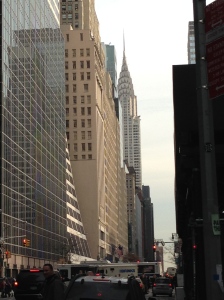 Some people equate Global Cities with something more: on top of the economists’ definitions, they also expect them to be multi-cultural melting pots, intersection points for all the races and cultures of the world. To me, this melting-pot criterion is not necessary: you don’t really get that in Tokyo or Hong Kong, and yet they are true Global Cities.

In the late 1990s some academics in Loughborough University, of all places, made a catalogue of Global Cities. In A++ place were London and New York, naturally. In close second at A+ level were Hong Kong, Paris, Shanghai, Tokyo, Beijing, Sydney, Singapore and Dubai.

According to my definition it’s almost right. Hong Kong may technically be part of China but it will always be, defiantly, just Hong Kong. Similarly, Shanghai’s colonial past sets it a little apart from the rest of China and it has its own unique feel and sub-culture. Beijing is inextricably linked with the rest of China, both culturally and economically, but its citizens remind me more of the people of New York than the people of Xi’an. Come and visit if you like, just keep out of the way.

But Sydney? To me, Australia’s largest city is still far too self-conscious to be a genuine Global City. Yes, technically its economic and political influence is significant both in Australia and in Asia Pacific, so the Loughborough University definition stands. But it tries too hard to be liked, admired, acknowledged. It’s like the younger sibling of one of the cool kids in high school, hanging around with the big boys, trying to fit in. It’s Sandra Dee, or a young graduate with their first proper job, hiding their lack of self-confidence money and swagger, but little sophistication.

Also, to this Old-Worlder, it’s difficult to see such a young city as a real Global City. To me, Global Cities are simultaneously ancient and new, patched together, organically developed, hectic places where you can almost see the growth rings like those of an old tree.

The chaos is only barely under control; the plumbing and sanitation and road works and public transport survive each day somehow, and everybody heaves a sigh of relief. One unfortunate passenger under a tube train, one set of Manhattan traffic lights on the blink, one Star Ferry running late, and London/New York/Hong Kong teeters on the brink of rush-hour annihilation.

That to me is what a Global City feels like.

A weekend in Singapore, then, was an interesting scenario. This famous city state holds around 6 million citizens in an area about the same size as the Tasman Peninsula in Australia, half of County Dublin or the Isle of Man. There are skyscrapers as far as the eye can see, but those in the central business district are so tall that the “regular” buildings further out don’t seem to warrant the name.

I had few expectations except for tales of humidity, pristine streets and underground shopping malls built to shield Singaporeans from the heat above ground. I looked forward to the biggest observation wheel in the world and plenty of rooftop cocktail bars.

Did it feel like a true Global City? I don’t know. Again, the economic influence is undoubted, and the urban landscape is sensational. The shopping is fantastic, the street food legendary, the coffee alone worth the trip. A smattering of world-class iconic structures make the cityscape interesting: the enormous Singapore Flyer and the Marina Bay Sands, a warped surfboard resting on a wicket.

But…. It was a little sterile. Of course, Singapore is renowned for its cleanliness and order, rules and regulations: no chewing gum, no littering, no durian fruit on the trains.

The trains run on time, the people all stand on the correct side of the escalator, and they all walk on the left hand side of the pavement. The result is a little futuristic and surreal, if like me you come from an ancient and chaotic town like Dublin. The people were unfailingly polite, friendly, warm and helpful, which was lovely. Whilst it was an incredibly busy place, there was little of the barely-controlled frenzy you often feel in other huge cities. I liked it, mostly.

The vast warren of inter-connecting underground shopping malls was a real eye-opener. I’m not a bit claustrophobic, but I ended up feeling quite relieved each time we emerged chilled and blinking from that air-conditioned fluorescent netherworld into the tropical sunlight. At any given time, six million Singaporeans are hermetically sealed in vast steel-and-concrete tubes, either horizontally underground or vertically reaching for the sky. It can’t be right. 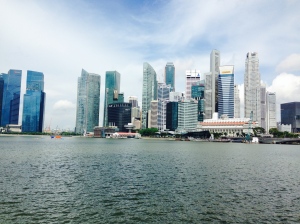 The rooftop bars were a delight. No matter where you are in the centre of town, the views are sensational. From the understated sophistication of the seventh floor Lighthouse Bar at the Fullerton, to the de trop ostentation of Ku De Ta atop the Marina Bay Sands, we tried them all (or many of them, anyway).

The Lighthouse was just delightful. “You look beautiful!”, exclaimed the (female) manager to me as I emerged from the lift. I didn’t, but I accepted the compliment graciously. A perfectly made Bombay Sapphire and tonic was the way to enjoy the tacky but entertaining laser show across the water at the Marina Bay Sands. Time your visit for 8pm or 9.30pm (and 11pm on Saturdays) to watch the dancing lights in understated luxury.

Ku De Ta is of course the place to see and be seen, and they keep away the hoi polloi with plenty of rules: men must wear closed-in shoes (women are good to go in strappy sandals). No shorts, singlets, slippers or tank tops. You’d better book ahead even for drinks (but the minimum spend is quoted as S$80 a head, and you don’t get a seat). The door staff on the ground floor will vet you even before you get to the lifts. The result was a spectacular view, no shelter if it rained, a disappointing drinks list, far too much ice and marmalade (you heard me) in my cocktail, very little space to take it all in and a quick decision to move on to the next bar.

The City Space bar on the 70th floor of the Stamford, on the other hand, may look north away from Marina Bay and That Building, but the atmosphere is relaxed, welcoming and much more grown-up. Karen the manager got to know us by name, scored us window seats every time and brought our “usual” cocktails to us with a smile.

The Lantern on the top of the modern Fullerton Bay is a great spot, not too high but perfectly placed to enjoy the unique Marina Bay skyline. It’s a bit after-worky in the early evening, but a great place to watch the sunset and get in the mood for the night ahead.

So is Singapore on my personal lists of Global Cities? No. Is it a good destination for a weekend break, a spot of shopping, a reason to sip a Singapore Sling by the pool, a chance to overdose on kopi peng (Singaporean iced coffee), an opportunity to dress up and bar-hop with the best of them? Absolutely.

See you next time, Singapore.

>Nine years ago, in August 1998, I was travelling around Mexico on a Trek America tour with nine or so fellow travellers. One of those fellow travellers was Kaz Kaufman, a Sydneysider, with whom I shared many margaritas under the stars. We remained firm friends, and I was a welcome guest in the home she shared with her partner Phil and dog Renton.

Kaz, incidentally, is allergic to chillies. The merest whiff of one brings her out in blisters. So it was pretty brave of her to travel around Mexico where the words “sin chile” indicate only that the chef should be a little less extravagant with the chillies. It would never dawn on anybody to put NO chilli in anything. Similarly for India and most of the rest of South East Asia, all of which has been extensively traveled by the indomitable Kaz.

So it was this evening that I found myself in in Sydney, meeting Kaz for dinner in Amo Roma, a charming Italian place in the most touristy part of Sydney, the Rocks. You would think it would be a tacky venue, but it was lovely. We sipped salty margaritas in the outdoors dining area on an unusually balmy August (late winter) evening, and put the world to rights.

The staff were simultaneously unobtrusive and attentive, patient with two people more interested in catching up on the gossip than reading the menu. The menu included the standard pasta and pizza fare, plus interesting winter dishes such as slow roasted lamb shanks and chilli-marinated calamari (naturally we didn’t order this one). Kaz chose a simple pizza with mozzarella, anchovies and black olives, while I ordered the lasagne. Both were delicious. The wine list was respectable enough, with a number of Italians wines by the glass. I chose a WA Shiraz.

The gas heaters were switched on just before the chill got too much, so there was no rush. We ordered coffees – incredibly smooth Vittoria espresso – before settling the bill, a respectable $104.

By the time we left the place was almost full. For such a tacky part of town most of the diners seemed like locals meeting up after work. Not bad for the Rocks. I will be back.

>Stir Crazy is a tiny loud local Thai place nestled in between about a dozen other eateries in Kirribilli – Thai, Chinese, Japanese, seafood, pasta. They don’t take bookings and the place is tiny. Prospective diners stand around outside on the pavement alongside the open-air diners crouched over their food on stools.

Inside it is cramped and loud; the waitresses waver between friendly and harried but they do their best. But the food was fantastic.
I ordered a vegetarian stir-fry – hot, I told the waitress – and Orlando ordered the chicken and beef stir-fry. They arrived in shallow bowls on banana leaves, steaming hot, incredibly spicy and quite sweet. I devoured mine with a sprinkling of steamed rice.
As soon as we were finished the bill was thrust under Orlando’s nose – no standing on ceremony here. For two huge dishes of food the total was $32. Brilliant value; so much so that we ate there again only two days later.